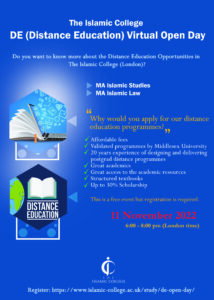 Are you considering the possibility of taking a university degree in Islamic Studies? END_OF_DOCUMENT_TOKEN_TO_BE_REPLACED

The Quran and the Spiritual Roots of the Environmental Crisis 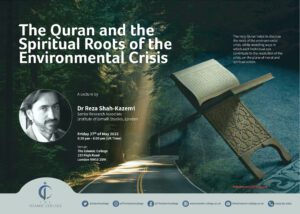 The Holy Quran helps to disclose the roots of the environmental crisis, while revealing ways

in which each individual can contribute to the resolution of the crisis, on the plane of moral and spiritual action.

Refreshments will be served.

This event is not a hybrid one and the lecture will not be streamed online.

OPEN TO: All are welcome!

*** Discounts on the book available at the book launch! ***

Shi‘ism, Iran, and the Islamic Revolution are subjects fraught with political biases and ideological agendas; sometimes, even fiction is presented as fact. This lucid collection of writings demystifies these subjects. With some of these pieces written before the Revolution, they demonstrate the trajectory of Imam Khomeini from being an obscure scholar and mystic to appearing on the cover of Time magazine. They also show how the study of Shi‘ism in the academy evolved from being a niche subject to a discipline in its own right.

A pioneer in the study of Shi‘ism and contemporary Iran, Hamid Algar’s work is marked by precise attention to detail, a near-unparalleled grasp of languages, and a forthright honesty. Thus he offers scholarship, a key to understanding Shi‘ism, Iran, and the Revolution as relevant today as it was when the essays were first written. Rather than projecting Shi‘ism as a historical monolith, this book takes the reader on a journey through the developments in Shi‘ism in the eighteenth and nineteenth centuries, discussing the debates over religious authority and modern political technologies. Rooting the development of the Revolution in a broader historical context, it also offers biographies of key revolutionary figures and explores ideological challenges faced by the nascent Islamic Republic, such as matters of war and social justice. Throughout the book, mysticism and politics intertwine; not only does the characteristically Shi‘i form of mysticism– ‘irfan – figure heavily in this work, but some sections are devoted to the relationship between the Shi‘i Imams and the Sunni Sufi orders, as well as the place of Sufism in Shi‘ism. Lastly, Hamid Algar provides sound, thought-provoking analyses of contemporary scholarship in the study of Shi‘ism, including the works of Henry Corbin and Patricia Crone. This book contains something for anyone with an interest in history, Shi‘ism, Iran, or the Islamic Revolution.

Hamid Algar (1940-) is Professor Emeritus at the University of California, Berkeley, where he served on the faculty of Near Eastern Studies for 45 years. His degree from Cambridge in Oriental Languages (Arabic and Persian) led him on a fascinating journey through the Islamic heritage and lands, both physically and metaphorically, in an era where Islam was scarcely known in the West. A prolific author, he has written not only on Shi‘ism and Iran but also the Naqshbandi Sufi order; the contemporary history of Turkey, the Balkans, and Afghanistan; and Arabic, Persian, and Turkish literature. He has lent his pen and deep command of languages to numerous translations, including Islam and Revolution, an early collection of Imam Khomeini’s speeches. One of the few Westerners to meet Imam Khomeini, Algar was able to meet with Khomeini a number of times, first in Paris, then in Qum and Tehran, and became well acquainted with his mode of thought. Vignettes of his travels, acquaintances, and studies appear in the introduction to the book. 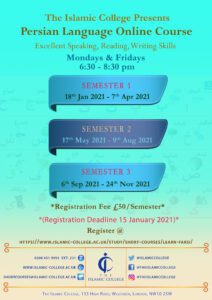 END_OF_DOCUMENT_TOKEN_TO_BE_REPLACED

The Islamic College invites you to the book launch of Chronicles of the Martyrdom of Imam Husayn, a comprehensive, reliable, narration-based account of Karbala. This book is a translation of the Shahadat Namih‑yi Imam Husayn (a), an abridged edition of a multiple award-winning encyclopaedia on the Imam’s life .
Date: Monday, 5 October 2020
Time: 7:30-9:00 PM GMT (London time) / 2:30-4:00 PM EST
Join us at: https://bit.ly/30lK94L
Speakers:
Dr Mohammed Ali Ismail (Host), Head of ICAS Press
Dr Isa Jahangir, Principal of The Islamic College
Seyed Hashem Moosavi, Director of the Islamic Centre of England
Shaykh Abbas Jaffer, Translator of the book
Dr Amina Inloes, ICAS Press

There will also be a special video message from the author of the original work and Head of the Dar al-Hadith Institute, Ayatollah Muhammad Muhammadi Rayshahri.

A big “Well done!” to the winners of this year’s awards! END_OF_DOCUMENT_TOKEN_TO_BE_REPLACED 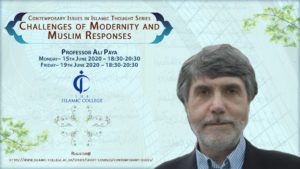